There is plenty of debate about the ‘quantitative/qualitative divide’ in the social sciences. Howard Aldrich has written an excellent piece arguing to abolish the distinction, and thereby reinvigorated the debate, for example on OrgTheory and Work in Progress.  A quick look at Google’s Ngram viewer is quite interesting. For “qualitative research” it shows

and for the distinction “qualitative/quantitative” 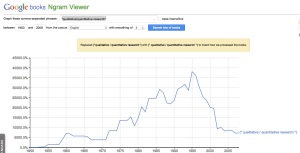 Without having pursued any further research into this, the latter graph might be indicative of Aldrich’s argument. It will be interesting to see if Lia Pearce’s forthcoming chapter will shed light on this.