A couple of years ago I visited Laurel Riek at the computer-lab in Cambridge. Laurel introduced me to some of the stunning humanoid robots she was experimenting with. One application for those robots, she said, could be homes for the elderly or homes where people live on their own; those robots could keep these ‘singles’ company.

At a recent meeting of the Digital Sociology Study Group (British Sociological Association) I met Ciara Garattini (@LifeDeathTech) who runs a blog called Life, Death and Technology. On the blog you’ll find a curious collection of items from a link to a photography collection by David Lynch to a notes on a Seminar on Death at Columbia University. 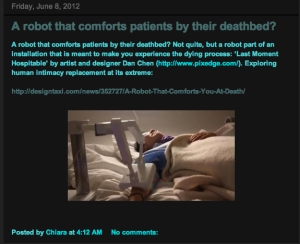 The item that drew my interest was an art installation by Dan Chen, “A Robot that Comforts you at Death’. Like the robots I encountered at the lab in Cambridge this robot is designed to replace human intimacy with technology. Although Chen said he had no plan to commercialise the robot the deployment of these kinds of technologies seems attractive.

The development of technologies like the robotic wheelchair demonstrates a growing concern in robotics and human-computer interaction to develop technologies that facilitate and support social interaction between people. Another example for technologies designed to enhance cooperation and interaction can be found in museums. For long, technology designers have focused on enhancing the experience of exhibits for the individual viewer or spectator; examples for such ‘individualising’ technologies are audio-guides and PDAs as well as many touch-screen systems. Fairly recently however, technologies have been deployed and experimented with in museums that facilitate cooperation, interaction and discussion. At the Tate Britain the exhibition of Constables landscape paintings was augmented by a large-scale projection that allowed multiple visitors to real the X-Ray image underneath one of the paintings and discover features that Constable had hidden by painting them over with bushes and treas.

In a very way, and this brings us back to the use of robots in museums, Yamazaki and colleagues (2009) deployed a robot in a major art museum in Japan. The robot was designed to draw visitors attention to particular features of a painting and encourage them to examine those features. The robot thereby monitored visitors’ responses to the information it was giving and produce subsequent actions in alignment with the actions of the visitors.

We therefore see two parallel development that might be worthwhile observing over the coming years as they might dovetail as robotics and human-computer interaction take further notice of sociological research of the organisation of interaction: first, there is the development of robots, robotic devices and other interfaces that facilitate interaction of individuals with technology. And second, there are developments that attempt to situate technologies like robots, gesture interface, and the like within social situations. These novel systems and devices are designed with particular care to fit in emerging social interaction, rather than interrupting it.

In Star Trek Next Generation the android Data is on the constant search for techniques that make him more human. His creator, Dr Soong, has made him look human, if a little pale, but what the particular techniques and what the particular rationale of actions are that would make him human, he has to explore and find out by living with human beings.

Yesterday, I spend some time at the Computer Laboratory in Cambridge where a group of scientists conducts research with human-looking robots. I was invited by Dr Laurel Riek – congratulations, Laurel, on passing the viva early in the week! –  to give a short talk and then have a look at the humanoid robots she has been working with over the past few years.

The robots are realistic looking busts that are equipped with a complex system of motors underneath their skulls. They have been created by a US-American company called Hanson Robotics.

Laurel used Charles and other robots of a similar kind for her research on natural human-robot interaction. Drawing on the growing body of studies concerned with social interaction, including gesture studies, the study of emotion and such like, she strives to improve the communication techniques of robots in order to enable their use in interaction with humans, in particular people in need of help, such as the elderly and disabled people.

Whilst in Star Trek Data discovers the human world by interacting within it, I found in my short encounter with Charles that human-robot interaction may provide us with resources to learn about ourselves and our actions. I think this is something Laurel is working towards when confronting people in healthcare settings with humanoid robots. Thereby, Laurel addresses current debates about how to improve the lives of those living alone or in care homes by deploying robots as companions or at least as other beings they can talk to and interact with.

Publications by Laurel Riek can be found here:

I found her paper “Cooperative Gestures: Effective Signaling for Humanoid Robots” very interesting but the papers on emotional displays in human-android interaction, I suppose, are where Laurel’s interest lies these days.