I’ve just been reading Walter Kirn’s review of Alice Marwick’s (@alicetiara) excellent book “Status Update“. The review strikes me as odd and off-the-mark. The author seems to have misunderstood Marwick’s book and misconceives ethnography by criticising Marwick for offering anecdotes. Never mind that review though. The book is very worthwhile reading for everybody with an interest in recent development in social media and social networking technologies. Marwick’s focus is not so much the technology itself, i.e. not Facebook, Twitter, Foursquare, etc. but the scene that has arisen in the context of these technologies. This scene mainly based in San Francisco, involves people who develop these technologies as well as people who use them for to organise their social lives, online and offline.

The book highlights how the entrepreneurs in their enthusisam for the opportunities offered by social technologies forget or ignore, deliberately or not, the neoliberal ideology that underpins their work and work ethic. The result of this ignorance is an inequality embodied in the observation that the entrepreneurs largely are young, white male. Women are decoration and accessories, “sex objects and secretaries” as Marwick writes. Whilst the media are full of talk about the “social media revolution” Marwick reveals that the members of the tech-community in San Francisco are technology enthusiasts with a business sense that at times makes (some of) them rich. Others who are not technology savvy enough to create their own Facebook-like riches exploit the opportunities offered by social media to become “micro-celibrities”. This status as mirco-celebrity allows some of them to connect with people, offline and online, who otherwise they’d never met. For some the drive to become a micro-celebrity and connect with the really rich and famous, means to reveal events and activities from their private lives, revelations some of them sometimes later regret; for example when being ‘trolled’ and spit out by the audience that for long seemed to love them.

Marwick’s book has variously been reviewed. If you want to check a good review before buying the book check Ravi Mattu’s review in the Financial Times and Finola Kerrigan’s (@finolak) review in Times Higher Education, but ignore Kirn’s in the NYT.

Over the past few years, together with comments at the Work, Interaction & Technology Research Centre (Christian Heath and Helena Webb) at KCL, Will Gibson at the Institute of Education and the optometrists Bruce Evans, David Thomson and Peter Allen I worked on research and knowledge exchange projects exploring the practical work of optometrists and developing communications training material. some of the research now has been written up and a few months ago a paper “Engendering Response: Professional Gesture and the Assessment of Eye Sight in Optometry Consultations” was published in Symbolic Interaction. This paper focuses on a particular procedure, the so-called Subjective Refraction that involves optometrist and patient in a sequence of interaction through which some of the characteristics of any corrective lens the patient might need, are determined. Some may recognise the test as the better/worse test as it is characterised by a procedure during which the optometrist alternates a patient’s vision by placing a lens in front of their eye as asking, “better with or without”. Our study here was particularly interested in the practice of placing the lens in front of the patient’s eye, a practice that we described as “professional gesture”. Although not specifically taught in optometric training the optometrists in our research deployed the lens by moving it in a particular way in front of the patient’s eye. The gestural movement of the lens in front of the patient’s eye followed almost exactly the same route through the air in all consultations that we filmed.  Our analysis reveals that such a carefully designed gesture is required for the optometrist to be able to arrive at reliable and robust data about the patient’s sight. They need the patient to respond to a series of different stimuli presented in front of them without reflecting about it.

Here is a video-abstract on the YouTube channel of Symbolic Interaction in which the lead author of the paper, Helena Webb, discusses the content of the paper and shows the gesture.

Lots has been written about Apple’s problems with their Maps application. Apparently, motorists stranded in a National Park in Australia after relying on the app had to be rescued and many people complain or joke about problems with the app.

This morning, I received a Tweet via @CityJohn who used the app after arriving at Clapham South Tube station (South London). He opened the app and triggered the locate function only to be shown this map. 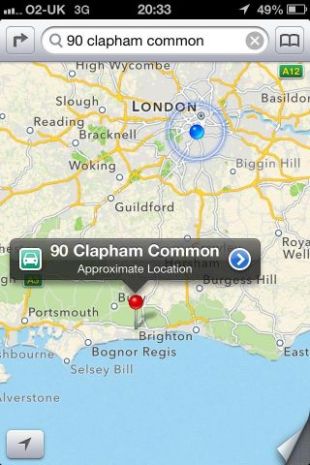 I don’t know what possessed me but I opened up my Apple Maps app and search for Clapham Common and was shown this map. 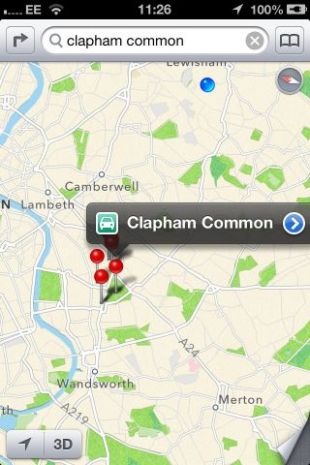 As far as I can tell the map accurately locates Clapham Common and I decided to pass a picture of the map on to  @CityJohn. I have no idea about or interest in the technical workings of Apple Maps but found it interesting how Apple Maps, not only in this case, has become a conversation starter on Twitter. We all know by now that the app is anything but perfect and there is no need to post more examples of its shortfalls. But by posting curious examples one is almost certain to receive a response from others.

So, not surprisingly, when checking on @CityJohn’s Twitter Stream there now is at least one other short sequence of a ‘Twitter conversations’, just like the one I had with him. Maybe it’s worthwhile creating a collection of such instances. Maybe, this is not everybody’s cup o tea though….

When I tweeted a review of Andreas Glaeser’s book yesterday that I had read on orgtheory.net a friend retweeted the post and added that “it’s only $8.55 on kindle”. Since I new the book was priced at £18.17 on amazon.co.uk I looked up the amazon.com site with my iPhone and noticed that it showed me a price of $29.10. 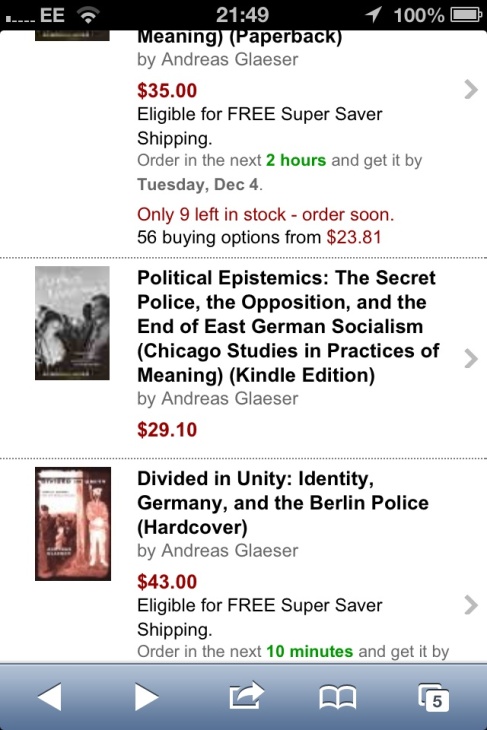 When arriving home I checked the book on my laptop and found a difference in price when I looked into the amazon.com site from when I was not logged in. 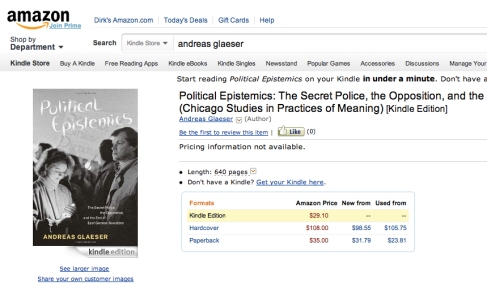 When I log out of my account and search for the book again, the price goes down to $8.55. 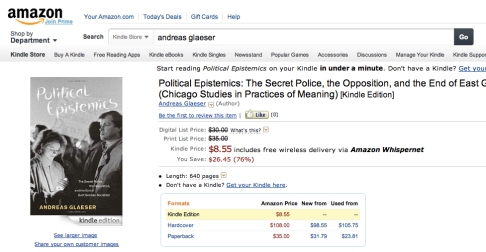 This observation points wither to personalized pricing or to big differences in geographical pricing of books and probably other items. In any case it reminds me of the advice that Eli Pariser gives in his book an on his website The Filter Bubble, clean your cookies.

Ilicco Elia, Head of Consumer Mobile, Reuters Media, gave a lecture as part of my module “Marketing and New Technologies” (MSc International Marketing) at King’s College London. Ilicco who has been working at Reuters since 1993 and at Reuters Mobile for the past 6 years, highlighted the increasing difficulty for media companies to retain their integrity whilst reporting news as they emerge.

Reuters are a news agency that over the decades has built up an image and a brand that stands for trust and integrity in news reporting. It now is confronted with the pressure that their customers Reuters to deliver up-to-date accurate information about events as and when they happen. Therefore, Reuters use about 2500 journalists to gather, edit and disseminate news to a global audience. These journalists use mobile technology, including networked high-end cameras, camera phones, mobile phones, laptops, etc, to gather information (pictures, videos, text, …) and immediately send it to the editor in the London office who produces news items that are disseminated across the various Reuters distribution channels. Illico illustrated the process by referring to the Football World Cup 2010 when pictures taken by journalists in South Africa appeared on Reuters mobile seconds after they had been taken. On the next day, the same pictures were published in newspapers around the world.

The immediacy that people increasingly demand from news organisations is driven by the growing pervasiveness of consumer mobile technology, such as mobile telephones, laptops and tablet computers. It is not sufficient anymore that Reuters disseminate news via its website but they have to develop applications, ‘apps’, that run on a range of different mobile devices and systems. Based on the opportunities offered by the iPhone and Blackberry phones Reuters created applications that deliver news through different kinds of mobile device. For example, Reuters New Pro, Reuters Mobile Website and Reuters RSS deliver global news to customers who are on the move; and Reuters Galleries exhibit the best photographs taken by Reuters correspondents around the word.

Ilicco highlighted the profound changes to journalism that have been initated by the wide distribution of mobile technology to consumers. It not only influences the consumption of news, everywhere and at any time but also the organisation of news production, editing and disemination. The scope of these changes is just becoming visible in the editorial offices but little is known of the emerging practices of news consumption.

The new technologies also facilitate new forms of journalism. In recent years, citizen journalism and the contribution of news by consumers in others ways has become more and more popular with many news organisations. This seems to be a dangerous path for organisations like Reuters that have built their brand on the integrity and authenticity of their news. News and information delivered by people other than Reuter’s journalists are difficult to assess in their truthfulness and authenticity. Similar, it can sometimes be difficult for news organisations to hold on and evaluate information before disseminating it, as competitors may push forward with the distribution of an item. Examples of the speedy dissemination of wrongful news are manifold. The Guardian for example pressed forward with repeatedly reporting that Nokia Smartphones would soon be running Google’s Android operating system. As we now know Nokia have entered a close collaboration with Microsoft, rather than Google.

The ease of diseminating news is a tempting for news organisations as for mobile users. By clicking on a few buttons a news item with (maybe incorrect) information, can be shared with friends and followers on social networks. The sharing of wrong news by mobile users can badly reflect on their image in the ‘twitterverse’. As Rob Wilmot highlighted in an earlier guest lecture in the same module in January, ‘trust’ is difficult to gain but easily lost in social media. And this valid for businesses and organisation as well as for individuals.

Ilicco Elia in the News